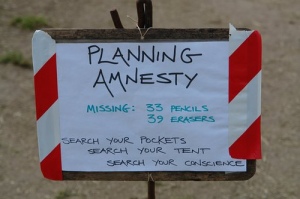 My next couple of papers come from the VERA project: Virtual Environments for Research in Archaeology. VERA was based at the still ongoing dig at Roman Silchester, managed by the Archaeology Department at the University of Reading. The project aimed “to produce a fully-fledged virtual research environment for the archaeological community”. Basically, we took the Integrated Archaeological Database system and took it into the trench, by putting wifi over the dig and experimenting with people uploading information right into the database (instead of capturing it with pencil and paper in the usual archaeological way, for digitisation after the dig ended) using Nokia 800s and digital pens. This was in 2007/8.

The project was funded by JISC as part of phase 2 of the Virtual Research Environments programme, and the reason for us at UCL getting involved was their doing: they specified that in this round of the programme, there should be user studies and user testing embedded into the project. Shortly after the call came out, I was chatting with Professor Mike Fulford, who manages the dig, at a conference, and he mentioned something about this and said something like, you dont know any people who do user studies do you? Why yes, yes we do, I said, and UCL promptly signed up to do this. Its the kind of thing that goes to show why you should bother networking…

It was great fun to be involved, and we visited the dig on various occasions, having a researcher on site to look at how users could use tech in the trench. The british weather was a bit of an issue, there were all kinds of shenanigans involved in keeping live wifi over the dig, and the technology was met with both excitement, and Not On My Land opinions. A picture I took on the site, above, even made it all the way to passiveaggressivenotes.com, and got featured in the Guardian newspaper. What larks.

Since then, of course, the market for handheld technology has changed dramatically – there was no iPhone at the start of this project when we were making decisions about tech, for example. I do also wonder if it is easier now to provide wifi over an external area – you would hope – although British Summertime weather is probably never going to be conducive to having hand-held tech in the trench (we did wonder if we should buy everyone waterproof sombreros, to keep screens in the shade, or to keep the rain off….)

We’ve also got another stack of papers on this that we simply haven’t had the time to finish up, so there may be more to come, although time is ticking on that one, as the tech we are talking about is rapidly changing, and 2008 to 2012 is a long time, in technology circles. The dig at Silchester still continues. I bumped in to Mike at a service station half way up the M6 a few months ago, and we said we’d keep our ears peeled for future funding calls to work together again…

And here are the published papers: