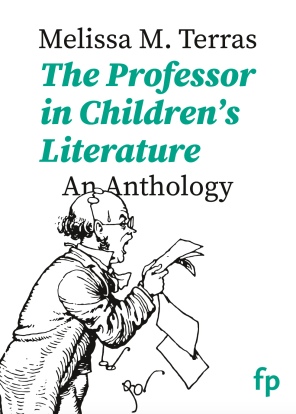 In Open Access week, in October 2018, I was very pleased to publish my two books about the relationship of academia to children’s literature. The first, Picture-Book Professors: Academia and Children’s Literature, is published by Cambridge University Press, and contains an analysis of academics as they appear in children’s literature, looking at biases, and what we are teaching children about expertise – but also how these biases map onto the constituency of the real life academy. It is free to view online or download in PDF from CUP,  and freely available for Kindle, over at Amazon. You can buy it in physical form, too, of course, if that is your thing.

Its sibling volume, which expands on and provides many of the early examples in the monograph, The Professor in Children’s Literature: An Anthology, published by Fincham Press (the press of the Department of English and Creative Writing at the University of Roehampton, which hosts the National Centre of Research in Children’s Literature), is available for free download in open access, both in EPub and PDF.  Kindle may be coming soon! And, of course, its available in print, should you want to buy it, too.

I’ve been lucky to have quite some coverage of these, so rather than repeat myself here, I thought I would list that coverage:

We had a lovely evening launching the book in Cambridge.

And how did it “do”? At the end of Open Access week 2018, Picture-Book Professors had been downloaded 1460 times:

My first analogue-only monograph only had a total original print run of 300. (That seems a lifetime ago – before open access, before free downloads, where the gold standard in the humanities was to have a short-run monograph from a major university press – I was happy with that, then!). In changed times, I can’t imagine why you would not want to share your work with as wide an audience as possible, and already the reach of this monograph is potentially far wider than my others, which were not published in open access. (I cover the costs of all this, btw, over on the Fincham Press blog).

The Professor in Children’s Literature has been downloaded 589 times since launch:

The anthology project was always about marrying open access with digitisation, to provide a means of showing your working out in the humanities, akin to the open-science approach to making your data available. I’m very proud of this anthology (although I learned that putting anthologies together is much harder work than it looks!)

I’m going to miss this topic: it was very much the “fun” thing I had ticking along in the background for over five years, chasing a research rabbit down the research rabbit hole for the pure joy of it, alongside the much larger, technical projects I take part in for the day job. It’s been a blast, and I’m incredibly proud of these books! So there we have it. A project that started off on twitter, moved to a Tumblr Blog, and began to consider this seriously in a blog post, has ended up in not one but two related academic books, which I manage to publish on the same day (with a lot of help from friends in the presses: everyone is thanked at length in the acknowledgements section of both books!).

I now need a lie down, before I start my next secret squirrel project in earnest…